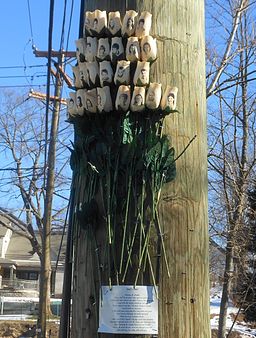 I want to be bulletproof, she says,
from the back of the car, Ingrid, my daughter,
in the third grade.

Bulletproof, you want to be bulletproof,
like the song? I say into the rearview mirror.
Like a bulletproof vest, she says,

for school, I don’t want to die.
This is what pop music has done to me,
7:50 am, this Wednesday ride to Sullivan Elementary.

She doesn’t like the news
that filters out of our bedroom television
like an argument through a heating duct.

She doesn’t like the regularity
of the drills now or the determination
in her teacher’s voice, either,

but it’s the closet
where they practice hiding
that has her rattled.

She can’t always get a spot in the back.
It’s the ones upfront whose legs stick out
and you can still see their toes;

it’s the ones upfront who die.
She has a plan.
She’ll hide in the bathroom.

Stand up on the toilet
where they can’t see her legs.
She’ll keep quiet.  She’s golden.

I was told once that parenting
is about slowly losing control,
that I can’t walk in front of them forever

setting their world to order,
that the buildings get bigger and the fields get wider.
And now she’s nine, and she has a plan.

I’ve been drunk and been carried home.
I don’t know what to do
when your Converse are still peeking out

and there’s a gun in the room.
She has a plan and I want to add
that if she’s near the gym

she can take the side door.
Run as fast as she can.
But I’m wrong.

Just look at the place.
You can’t even go outside anymore.
Parenting is about slowly losing control

and today is the first time my daughter gets to say
you have no idea what you’re talking about,
the first time I can’t say to her I know exactly what you mean

and mean it.
My eyes soften.
I am slowly losing control.

When Sia sings she means Freedom.
What my daughter hears is Survival.
A hidden place for every pair of legs,

Adam Grabowski holds an MFA in Writing from the Vermont College of Fine Arts; his work has appeared in Off the Coast, jubilat, DMQ Review, and elsewhere.

This poem appeared earlier this year in What Saves Us: Poems of Empathy and Rage in the Age of Trump, published by Northwestern University Press and edited by Martín Espada.
Image: Alexisrael [CC BY-SA 3.0 (https://creativecommons.org/licenses/by-sa/3.0)%5D